I’m gonna go ahead and help a fellow blogger I happen to know really well.

And here’s the deal: I’m making an ark of likes. That’s right. The ark will be full at 100 followers, and I need your help to get there!

OR, you can click here to go to my page

Maybe once I reach 100 followers, a bunch of Nazis will show up and try to take my ark away so they can win the war, and then when they open my ark their faces will melt,

But that remains to be seen.

C.S. Wilde, you pompous bastard.
You get extra points for this.

If you know me (okay, let’s put it differently: if you know Princess Kickass), you know we’re HUGE Star Trek: TNG fans.

So here are the best Picard memes out there, just for you. 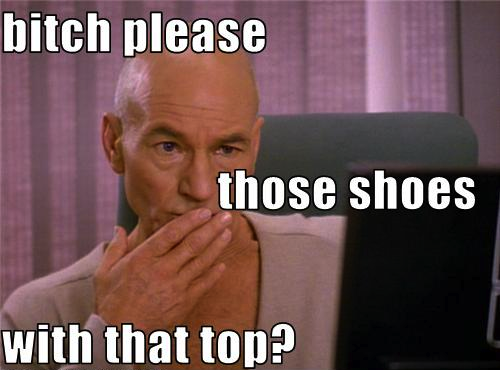 Bitch, please. Seriously. Those shoes are ugly as F. Yes. Yes to this.

Tell me about it, JLP…

And to end it:

Sorry, just wanted you to hear it.

Hey guys, you’ll find great blogging advice on this post! Totally worth the read! Plus, we get a Picard GIF. It doesn’t get better than that.

I can’t fight this feeling, deep inside of me, I’m hooked on a feeling…blogging, you don’t know what you do to me.

I’m not entirely sure how many posts about blogging advice I’ve read in the past couple of years. Some posts were extremely helpful, others decidedly unhelpful, many didn’t pertain to me, and others gibberish. So here’s my best blogging advice that will most certainly change the way you blog forever!

2.Write posts that are 300 words to whatever-your-readers-think-isn’t-too-long. Think of each post as a summer hat, you want it to cover your face and neck, but you don’t want to be the one with thatRoyal Wedding hat.

3. Add pictures and images to your posts. There are many ways to do this – take photos, make memes, scan, find, paint, draw…and please credit them, if possible.

Happy Easter everyone! *Raises glass* Here’s to days off work, because that’s what holidays are all about.

I shall leave you with more adorableness from Penny (Do check out her work, it’s the cutest thing since doe-eyed puppies).

I cannot put to words how much I love Penny’s work. It’s sweet and touching. You guys should totally check her out, she deserves all the love! ❤

You guys, he’s not just a pretty face!

Oh, and if you don’t know who OM is, I suggest giving this blogosphere phenomena a visit.